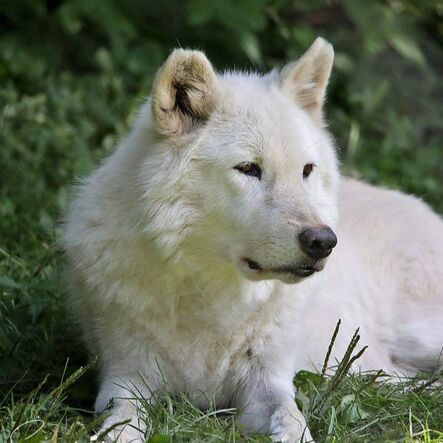 ​
​"Turtle", as we call him, is named in honor of Raymond Dancing Turtle who made the journey of the rainbow bridge many years ago. Ray dearly loved coming to see the wolves and even with his failing health, he managed to walk to the fence and greet the wolves. When Natani gave birth to one male pup in 2008, we decided that he would be called Dancing Turtle in honor of Ray. Turtle, an Alaskan/Arctic wolf, is a large,intelligent and impressive animal weighing about 140 lbs in the winter. When frustrated (such as when he feels staff are not feeding quickly enough, or when he hears gun shots or fireworks in the distance), Turtle will rip branches off of the trees in his habitat; sometimes he pulls younger trees out of the ground roots and all--a truly powerful animal! Dancing Turtle lives with his sister Tashina in a "retirement" enclosure where he can oversee most of the Center and its activities. 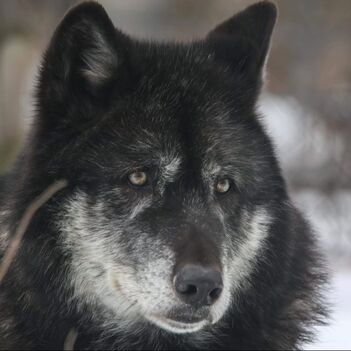 Seneca is a very impressive black phase Timber wolf born in 2011. Black phase Timber wolves are generally native to areas such as British Columbia, southern Canada, interior Alaska and are common in Yellowstone. In the past, these animals would feed on migrating salmon in the clean, cold waters. Unfortunately, humans have come along, damned and altered the rivers, built settlements, and many water ways have been polluted by paper mills, mining, gas and oil operations. This has taken away an important cultural food for many animals. This is indeed a cultural loss for these wolves. Seneca is easy to distinguish from his brother, Cayuga, as his fur has "white frost" in places. Seneca & his brother came to the center at only a few weeks old, thus allowing us the opportunity to social them with people. Several years ago Seneca and his litter mate brother, Cayuga had to be removed from the main pack due to incompatibility issues. Both now reside in the wooded enclosure behind the gift shop. 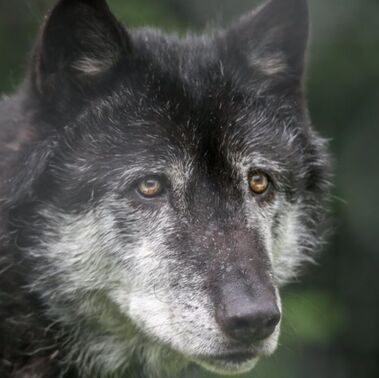 ​Cayuga is Seneca's brother, also a black phase Timber wolf born in spring of 2011. Although he was socialized with people from a very young age, Cayuga is still much more wary of people than his more outgoing brother. Cayuga loves to post himself as sentry atop of the hill in their shared enclosure and is constantly alert to everything happening around the center. Cayuga loves to howl and is usually one of the first and last howling during a pack howl! Cayuga's eyes are stunning and visitors often comment on how intense they look.  Cayuga is clearly the dominant of the two and around breeding season they generally have to "discuss" that issue again. Along with his brother Seneca, these guys absolutely love apples; in winter, we sometimes get a bag of apples from the store as a treat! 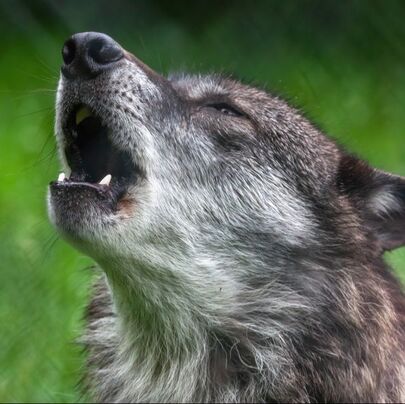 ​
​
​Tamarack, an Alaskan Tundra wolf, was born in the spring of 2015. He and his sister, Dyani, arrived at the center at three weeks of age. He has an exuberant personality and loves attention from wolves and caretakers alike. He can often be seen prancing around with a stick or snake in his jaws. He loves to paw gently at caretakers for attention and often throws himself on the ground hoping for a belly rub! He is a black phase wolf, however when sunlight hits his coat just right, he appears to be more of a brownish color. 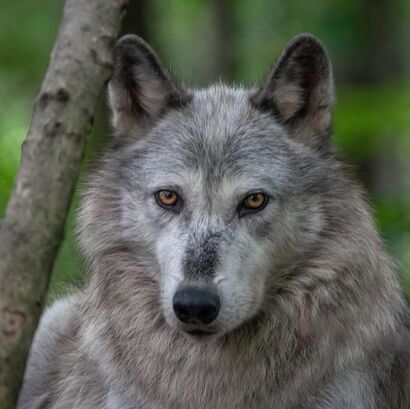 ​Dyani, meaning "deer hunter", is a black phase Alaskan Tundra wolf born in 2015, is sister to Tamarack. She resides with the Wolf Woods pack in the 9+ acre enclosure. Often not immediately visible to visitors, Dyani is usually found lurking in the shadows (and safety) of the trees or brush. She is a very tentative, cautious wolf who prefers to observe from a distance when people are nearby. To familiar caretakers, she is a sweet, loving animal. She loves playing with Sequoyah and is the clear leader of the group. In 2017, Dyani & Sequoyah mated and produced two offspring, a black phase male and a gray female, who both now reside at Wolf Park in Indiana. Again in 2019, she produced another healthy litter of five black phase pups (three of which remain at wolf Mountain; the other two live at Lakota Wolf Preserve in New Jersey). 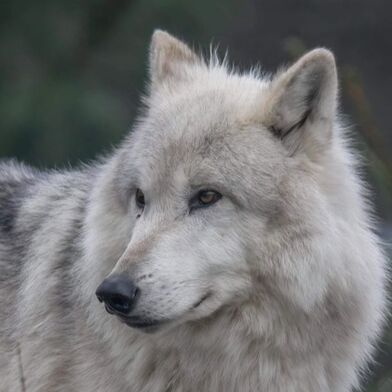 ​Okwaho, a Mohawk Indian name meaning wolf, was born in 2015 and is an Alaskan Tundra wolf. He and his brother, Sequoyah, joined us at only five days old. Okwaho, with his very tall guard hairs which stand on end, is our entertaining wolf who often followed his brother around the enclosure.  Originally living in the main pack, he was a strong initiator of play and routinely troted around with sticks, deer legs, or other findings in his mouth in an attempt to engage the others in play. Once D
​yani approached her first breeding season, she decided omega Okwaho was no longer welcome in the pack and staff felt is in the best interest of Okwaho's safety to remove him to a safer location. Now living in his own habitat with a younger female wolf, Sakari, Okwaho is once again happy, content, and playful! He has grown into a confident beautiful wolf who keeps vigilant watch over Sakari and his domain! 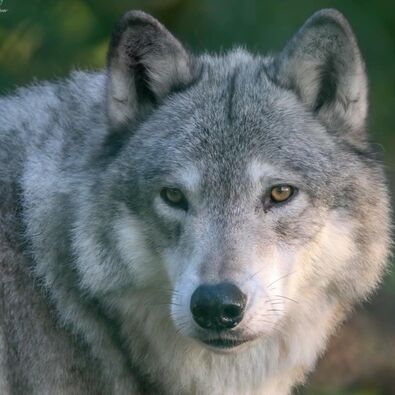 ​​Sequoyah, born in 2015, is an Alaskan Tundra wolf and brother to Okwaho. Sequoyah is a beautiful animal whose strong personality seemed destined for alpha status. He is diligent in patrolling his 9 acre enclosure and is first to greet caretakers at fence lines or gates determining if they are "okay" to enter his territory. Sequoyah and Dyani spend lots of time together and the two mated in 2017 and again in 2019. He has a special bond with one of our animal caretakers and has on numerous occasions brought her various "wolf gifts" such as cached food. Sequoyah loves to howl day and night; his howl is full and deep; one that touches the very depths of people's soul. As a father, Sequoyah is incredibly protective of his pups and patrols the nine acres keeping the territory safe. 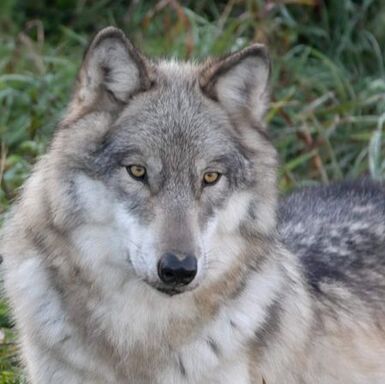 ​
​Cypress was born at Wolf Park in Indiana in 2017. He and his sister were swapped with pups born here at Wolf Mountain in order to introduce new blood lines into potential breeding packs. A timber wolf, Cypress is full of mischief, giving targeted caretakers a definite test whenever he   can to make sure staff know the protocols when it comes to working with wolves. Once he determines a caretaker is "cool", Cypress often lays down and rolls over for his expected belly scratch. He loves to play with his sister and chases her relentlessly in a never-ending game of tag. He usually catches her and pins her down until she nibbles at him to release her; the game then starts again. 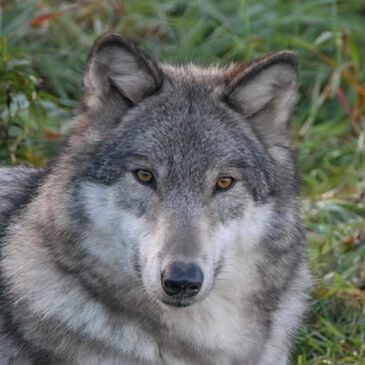 ​Tauriel is the sister and litter mate of Cypress and born at Wolf Park in Indiana in 2017. Raised by caretakers at Wolf Park, Tauriel joined the Wolf Mountain family with her brother at about five weeks of age. Now sharing a spacious area with Cypress, she has plenty of meadows and forested areas to run and play. One of her favorite past-times is to watch wolf neighbor Dancing Turtle. Caretakers are convinced the two have a "crush" on each other as the two run and play bow to each other even though they are in separate enclosures and are eleven years apart in age. Dancing Turtle would never be able to keep up with Tauriel's boundless energy! Tauriel is like a wolf pogo stick--she jumps straight up into the air easily reaching heights of six or more feet! She is an absolute sweetheart with staff and loves to receive their affections. 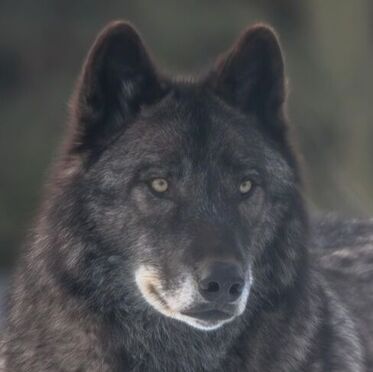 ​
​​Kitan is the only male pup born in Dyani's (& Sequoyah"s) litter in May of 2019! Having four sisters, he needed a name fitting of him; Kitan means "strong & confident"! Living with his parents and one sister, he is growing into a very strong & confident wolf! He frequently hangs with his dad, learning the ways of the dominant wolf--often he gets into mini battles of testing behaviors with Sequoyah until Sequoyah growls, snaps at and pins Kitan to remind him who still has rank. Undoubtedly at some point later in life, Kitan will challenge his dad for role of the pack's Alpha wolf. 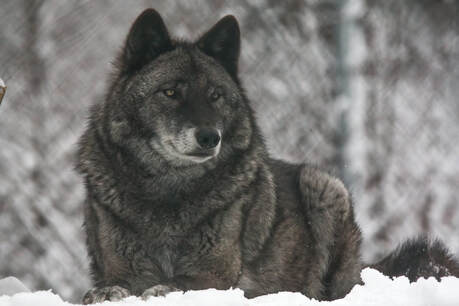 ​Sakari was the first of the litter of five siblings to open her eyes and respond to the sound of a Caretakers voice. Her name, meaning "sweet one," describes Sakari perfectly! She absolutely loves her humans and often will howl relentlessly until they enter her habitat and give the attention she craves! Living with her uncle Okwaho, the two are almost always found within in a few feet of each other whether it be under the shrub bushes or on top of their platform. A very playful wolf, Sakari has rejuvenated Okwaho and loves to run! 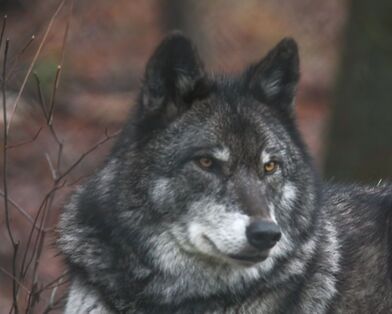 ​
​Tehyah, meaning "spiritual one," is another sweet female wolf who absolutely loves everything! Always happy, always submissive, she follows her mother Dyani around almost all day; the only exception seems to be when she and her brother Kitan are playing. She loves racing through the forest, meadows, and even the ponds in her nine acre home. Tehyah is typically the first wolf to greet caretakers and then uses her body to make sure the attention stays focused on her. Although very tolerant of pretty much anything, she does not allow Kitan to take her food at mealtime and makes it clear on no uncertain terms!

Those who have crossed the rainbow bridge...